What is Parkinson’s disease?

Parkinson’s disease is characterized by the occurrence of some identifiable signs. These include uncontrollable shaking or trembling, loss of balance, and difficulty speaking. Symptoms however differ and can intensify as the disease advances.

What are the symptoms of Parkinson’s disease?

The main symptoms of Parkinson’s include: 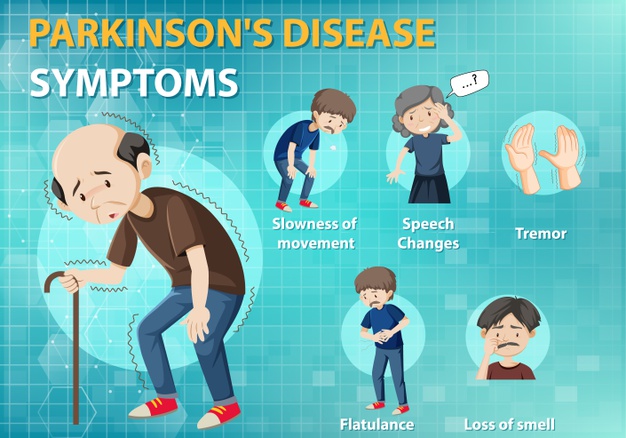 While Parkinson’s disease (PD) is a progressive disease that worsens over time, it is deeply subjective and affects people in various ways. Not everyone with Parkinson’s disease will develop all of the symptoms, and the severity of the symptoms can vary from patient to patient. Progress comes at different rates for different individuals. Physicians, on the other hand, have described stages that explain how the disease progresses.

What Are The 5 Stages of Parkinson’s Disease? 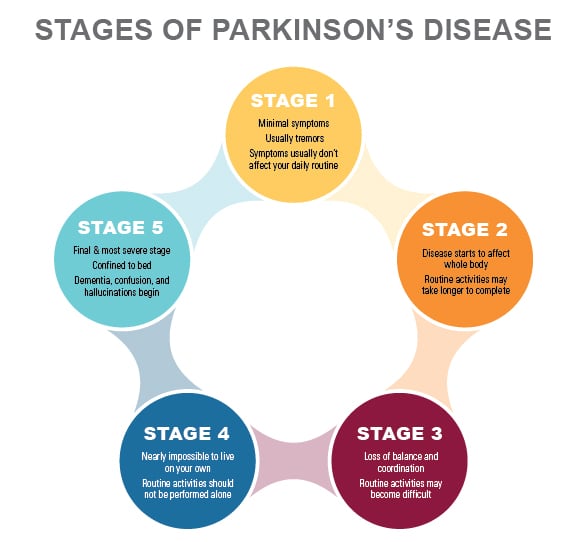 The Hoehn and Yahr Scale is a five-stage Parkinson’s disease classification system used by doctors all over the world.

Parkinson’s disease is categorized into three stages: mild, moderate, and extreme. There may be symptoms at this stage, but they aren’t serious enough to interfere with everyday activities or your overall lifestyle. In reality, the symptoms are so minor at this point that they’re often overlooked. However, changes in your stance, walk, or facial expressions can be noticed by family and friends.

Tremors and other movement difficulties are almost always limited to one side of the body in stage 1 Parkinson’s disease. At this point, prescribed drugs may help to relieve and reduce symptoms.
During this level, the person experiences only minor symptoms that do not interfere with daily activities.

One side of the body experiences tremor and other movement symptoms. There are variations instance, walking, and facial expressions.

At this point, the symptoms of Parkinson’s disease may be so minor that the patient does not seek medical help or the physician is unable to make a diagnosis. Tremors, such as occasional tremors of one hand, rigidity, or the feeling of one hand or leg becoming more clumsy than the other are all signs of stage one. One side of the face may be affected, affecting the voice.

Stage 2 is a mild type of Parkinson’s disease, with signs that are much more pronounced than those seen in stage 1. Stiffness, tremors, and shaking can become more evident, and facial expressions can change.

Although muscle tension makes it take longer to complete a mission, stage 2 does not affect balance. Walking problems can grow or worsen, and the person’s posture may begin to alter.
At this point, people experience symptoms on both sides of their bodies (though one side may be affected only slightly) and may have difficulty speaking.

It can take months or even years to progress from stage 1 to stage 2. And there’s no way to know how each individual will advance.

Loss of facial expression on both sides of the face, reduced blinking, speech abnormalities, quiet voice, monotone voice, fading volume after beginning to talk loudly, slurring speech, stiffness or rigidity of the trunk muscles that may result in neck or back pain, stooped posture, and general slowness in all activities of daily life are all symptoms of PD in stage two. However, the person is still capable of performing daily tasks at this level.

If the patient has a tremor, diagnosis may be simple at this point; however, if stage one was skipped and the only signs of stage two are slowness or a lack of spontaneous movement, PD may be misinterpreted as simply aging.

Step 3 is the middle stage of Parkinson’s disease, and it marks a significant turning point in the disease’s development. Many of the signs and symptoms are identical to those in stage 2.
At this point, Parkinson’s disease has a huge impact on everyday activities, but people can still perform them. Symptoms can be significantly reduced with the aid of medication and occupational therapy.
Loss of balance and sluggish movements are hallmarks of this point. The inability to make the rapid, automatic, and involuntary changes required to avoid falling loses equilibrium, and falls are normal at this point.  The person is still completely independent, but symptoms make tasks like dressing and eating difficult.

During this stage, a physician will often diagnose reflex impairments by standing behind the patient and gently pulling the shoulders to see whether the patient has difficulty keeping balance and falls backward (the physician, of course, will not let the patient fall). The patient is also completely independent of everyday life tasks such as dressing, hygiene, and feeding, which is a significant distinguishing characteristic of stage three.

Independence differentiates individuals from stage 3 from others with stage 4. The fourth stage makes standing without support. Movement, however, can involve a walker or other assistive device.
Many people cannot live alone at this level of Parkinson’s due to substantial decreases in movement and reaction times. Living alone at stage 4 or later will make several everyday tasks difficult and extremely dangerous. Symptoms here are serious and restricting.

At this point, the patient is unable to live an independent life and needs help with certain everyday activities. The need for day-to-day support defines this point. If the patient can still live alone, stage three is still established.

Step 5 is Parkinson’s most advanced stage. Advanced leg stiffness may also cause freezing while standing, making standing or walking difficult. People at this point need wheelchairs, frequently unable to stand alone without collapsing. Assistance is required 24/7 to avoid falls.

At stage 5, up to 30% of people experience confusion, hallucinations, and delusions. Hallucinations occur when you see non-existent things. Delusions occur when you believe things that aren’t real, even when there’s proof that your conviction is incorrect. Dementia is also widespread, affecting 75% of people with Parkinson’s. Later side effects of drugs can sometimes overshadow the benefits

While the symptoms worsen over time, it is worth noting that some patients with PD never reach stage five. Also, the length of time to progress through the different stages varies from individual to individual. Not all the symptoms may occur in one individual either. For example, one person may have a tremor but balance remains intact. Also, there are treatments available that can help at every stage of the disease. However, the earlier the diagnosis, and the earlier the stage at which the disease is diagnosed, the more effective the treatment is at alleviating symptoms.

Elite Ayurveda is one of the most effective alternative treatment centers for Parkinson’s Disease.

“Medicine given to any patients without analyzing the root cause, will simply go in vain,” says our Lead consultant, Dr. Adil Moulanchikkal.

At Elite Ayurveda, we decipher the root cause of the condition and treat it accordingly. As the cause is different for different individuals, We provide those treatments which help mitigate the root cause.