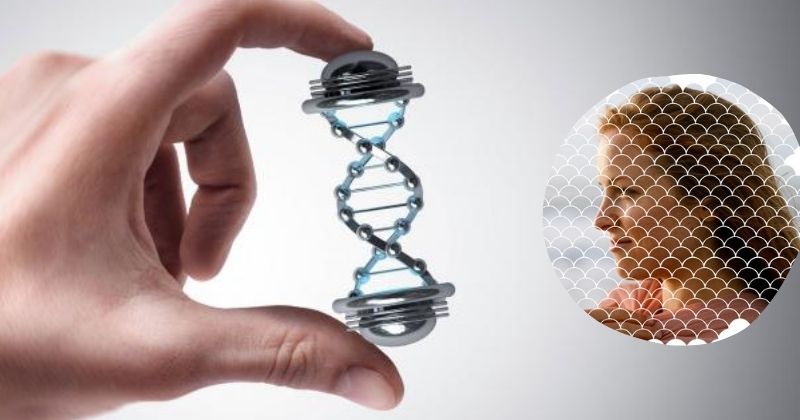 Psoriasis is an inflammatory skin disease that can affect a variety of bodily systems. Psoriasis patients may have mutations, or changes, in specific genes, indicating a genetic aspect to the disease’s development.

Psoriasis has been shown to run in families in previous family and twin studies.
Having a particular genetic characteristic or a family member with psoriasis, on the other hand, does not guarantee that an individual will develop the disease.

Read More: Sleep and Psoriasis: Is There a Connection?

What is psoriasis and how do you get it?

Psoriasis is a chronic inflammatory skin condition with a polygenic inheritance pattern. The disease’s etiology includes both environmental and genetic influences. Itchy scales, inflammation, and redness are all signs of this skin disease. The scalp, knees, elbows, hands, and feet are the most commonly affected areas.

Psoriasis is an autoimmune disease that affects the skin. Newly formed skin cells are wrongly identified as foreign invaders by immune cells in your blood, which destroys them. This can result in an overabundance of new skin cells under your skin’s surface.

Existing skin cells are pushed out by these new cells as they move to the surface. Psoriasis is characterised by scales, swelling, and inflammation.

Genetics is almost definitely a factor. Continue reading to learn more about the role of genetics in psoriasis growth.

Read More: Tips for staying active while living with “Psoriasis”

Is psoriasis likely to be hereditary?

According to studies, psoriasis can run in families.

Some people with genetic features do not develop psoriasis for a variety of reasons. like

This means that both environmental and genetic factors influence whether or not an individual develops psoriasis.

In other words, a person with psoriasis in their family may be more likely to develop the disease themselves, but only if some other factors are also present.

As a result, it is impossible to predict who may develop psoriasis, and a person who has psoriasis in close relatives does not necessarily have it.

Is there a link between genetics and psoriasis?

According to the National Psoriasis Foundation, psoriasis typically occurs between the ages of 15 and 35. (NPF). It can, however, happen at any age. Every year, approximately 20,000 children under the age of ten are diagnosed with psoriasis.

Scientists studying the genetic causes of psoriasis continue by believing that the disease is caused by a deficiency of the immune system. Psoriatic skin produces a vast number of immune cells that manufacture inflammatory molecules known as cytokines, according to research.

Additionally, psoriatic skin has alleles, which are genetic variations.

The existence of this allele, HLA-Cw6, was later discovered to be insufficient for an individual to develop the disease. More research is required to better understand the relationship between HLA-Cw6 and psoriasis, according to recent studies.

Using more modern methods, researchers have discovered approximately 25 distinct regions of human genetic material (the genome) that could be linked to psoriasis.

As a result, genetic testing can now assess a person’s probability of developing psoriasis. The relationship between the genes linked to psoriasis and the disease itself is still unknown.

Psoriasis is a disease in which the immune system and skin interfere. As a result, determining the cause and effect is difficult.

New genetic research results have offered valuable information, but we still don’t know what causes a psoriasis outbreak. The exact mechanism by which psoriasis is passed on from parent to child is still unknown.

Which genes does it involve and how?

Psoriatic illness can be caused by a number of genetic factors, according to researchers.
Researchers have been looking into which genetic factors may increase the risk of psoriasis in some people. Specific forms of psoriasis could be more likely as a result of different genetic changes.
Genes linked to psoriasis are mostly involved in the immune system. Scientists have identified about 25 genetic changes that may lead to psoriasis, according to the National Psoriasis Foundation.

In the section below, we go over a couple of them:

Researchers discovered a mutation in the CARD14 gene in 2012, which appears to play a role in the development of psoriasis. According to Genetics Home Reference, changes in this gene may cause further inflammation.

When unique environmental causes are present, changes in CARD14 can lead to psoriasis, according to research.

Changes in other genes and gene classes can have an effect on how the immune system operates by causing the inflammatory response to increase.

Many genes can contribute to the development of psoriasis or increase a person’s susceptibility to the disease.

Psoriatic arthritis risk can be increased by changes in the human leukocyte antigen (HLA) complex. This gene family helps the body differentiate between foreign invaders and healthy tissue.

Changes in a variety of genes may be involved in each form of psoriasis. Furthermore, certain genetic variations can be seen in different forms of psoriasis. A single gene may have a number of variants.

Elite Ayurveda places a strong emphasis on treating skin disorders in all forms, including diet, exercise, and medicine.

Our lead specialist, Dr. Adil Moulanchikkal, and his trained team will assist you in regaining your normal skin.

“Both skin disorders can be treated if the patient is able to follow the doctor’s instructions,” says Dr. Adill, who is committed to the betterment of all people who suffer from skin problems.

Diabetes|Yoga is the best exercise in Fighting Obesity

The Three Core Symptoms of Autism