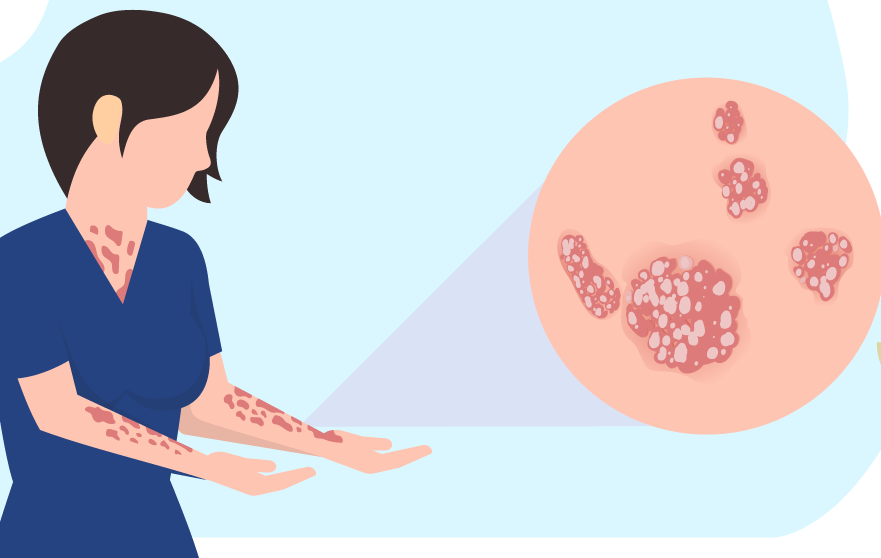 Psoriasis is a skin condition caused by a malfunctioning immune system. It can be painful and humiliating, and people with psoriasis can notice that people around them treat them differently when they have a flare-up.

Quick Myth and Facts on Psoriasis: 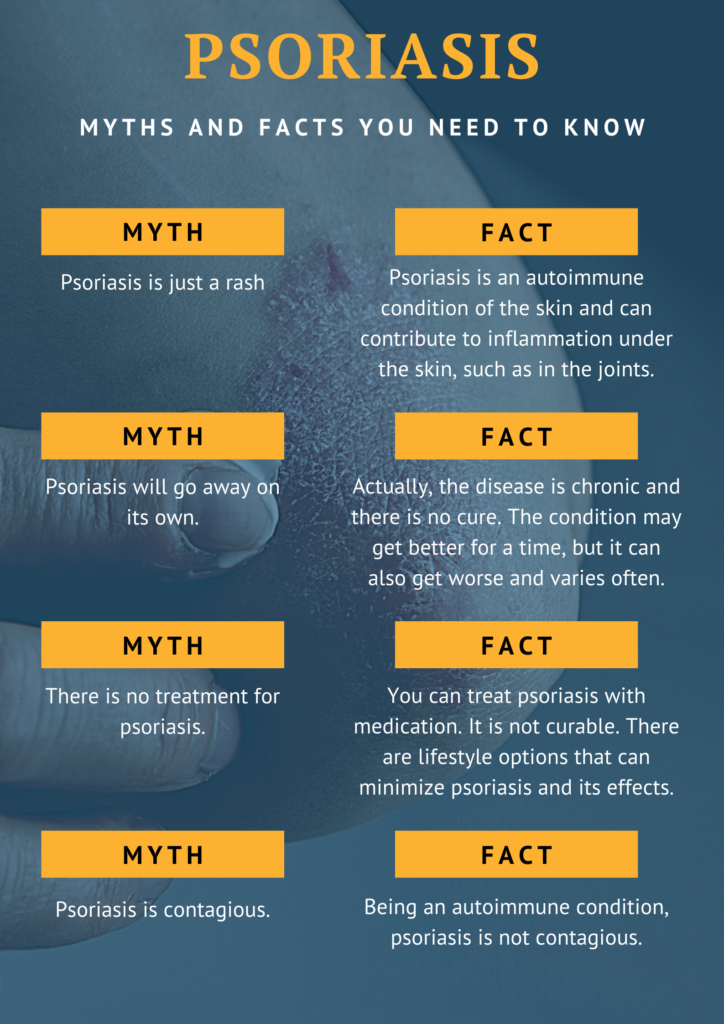 How Does Psoriasis Develop?

Though psoriasis symptoms appear on the skin, the condition is actually an autoimmune disease that affects the immune system. It means that the body’s defenses overreact or react at inopportune moments, causing internal and external effects.

There are many types of psoriasis, but plaque psoriasis is the most common. Lesions are most often found on the knees, elbows, and scalp, but they can occur anywhere on the body. These patches can become swollen, itchy, and painful, as well as crack and bleed. Tiny red spots, pus-filled bumps, or red scaling patches appear on other forms of the disease.

Your skin cells die and regrow more rapidly as production rises. This results in an accumulation of immature skin cells that don’t behave normally, resulting in itchy skin patches. The patches may be red, very dry, and dense, and they may look silvery.

Psoriasis is caused by a combination of factors, including the immune system and genetics. Psoriasis can appear anywhere on your body because it affects your whole body. Psoriasis most often affects the scalp, knees, and elbows, but it can affect any part of the body.

The severity of the skin condition can also vary. It’s likely that your psoriasis will worsen or improve over time. Psoriasis may have a variety of appearances and sensations depending on where it is found.

If your psoriasis becomes more serious, it can appear that it is spreading to other areas of your body. In fact, you’re experiencing a flare-up.

Psoriasis is not infectious, and it cannot be contracted or transmitted from one person to another. If you already have psoriasis, it can spread to other areas of the body, but there are ways to keep it from getting worse.

Psoriasis does not spread from person to person, but it does affect various parts of the body.

People who have never seen psoriasis might believe it is contagious. Psoriasis, on the other hand, is not an infectious illness, and the scaly patches it produces do not spread.

This is because the immune system mechanism that causes psoriasis will worsen, not because the infected skin infects other parts of the body.

Before physicians figured out what caused psoriasis, it was often misdiagnosed as leprosy, and those who had it were thought to be infectious. However, we now know that you can’t get the disease by coming up against someone who has it. You can’t get it by kissing, having sex, or swimming in the same pool with someone who has it.

Psoriasis is caused by a person’s genes or lifestyle, not by poor grooming or any other behaviors. They did not contract it from anyone else, and they are unable to spread it to others.

Even then, there is a lot of stigmas associated with the disease, which can be difficult for those who suffer from it. They may feel self-conscious when people look at or avoid touching their lesions, and they may try to conceal their outbreaks with long clothes.

If you have psoriasis, engaging frankly with friends, family and coworkers will help clear up any uncertainty or misunderstandings regarding the condition. If you meet someone who has it, make sure they understand that their illness has no bearing on your view of them or your desire to be around them.

Autoimmune diseases are Not Contagious. They are thought to be triggered by a mixture of genetic and environmental causes that “trip up” the immune system.

Psoriasis isn’t contagious in any form. It’s an autoimmune condition — not an infectious disease. If you hear someone question that fact, take a moment to educate them. Doing so can help promote an environment of acceptance and understanding.

At Elite Ayurveda, get treated for psoriasis by our lead expert Dr. Adil Moulanchikkal with uniqueness.

An Ayurvedic Guide to Psoriasis: Signs, Causes, methods of Treatment.

Sleep and Psoriasis: Is There a Connection?

Types of Headaches That You Should Never Ignore

The Balance between Diet & Detox