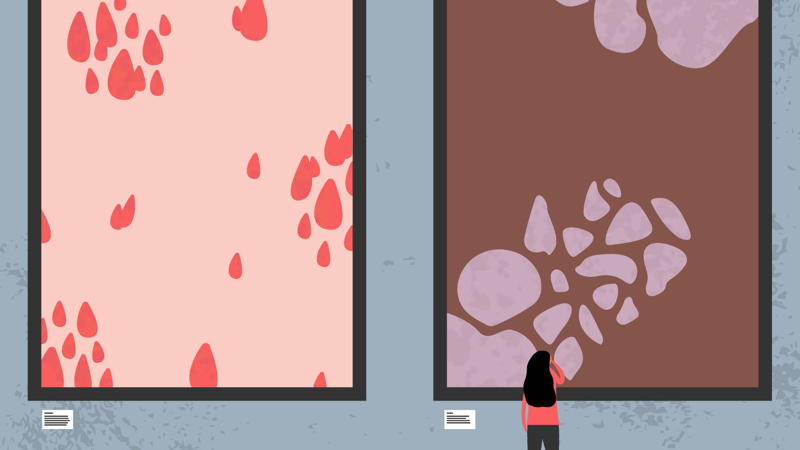 Eczema and psoriasis resemble twins in appearance, however, they are fundamentally different 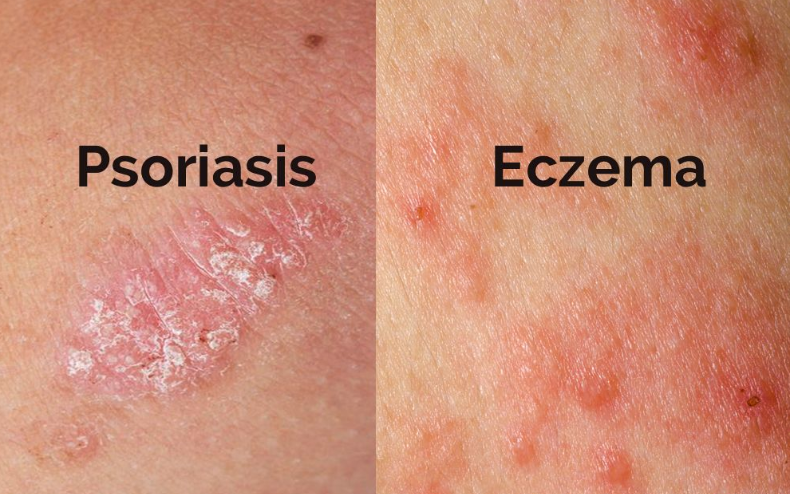 Psoriasis and eczema are two separate medical conditions, While there are significant similarities between eczema and psoriasis. yet some people confuse them because of their similar symptoms. By the end of this article, you should have a more detailed understanding of the differences to look out for.

Check for Psoriasis vs Eczema

How to check for psoriasis?

Psoriasis is characterized by a dense patch of white scales. Psoriasis is another chronic autoimmune disease that causes an overgrowth of skin cells. The dead cells clump together to form silvery-white scales. The skin turns inflamed and swollen, resulting in severe itching.

How to check for Eczema?

Eczema, also known as atopic dermatitis, is a chronic skin disease. It happens as a result of a hypersensitive reaction. As a result, the skin overreacts to such stimuli as dyes, fabrics, soaps, animals, as well as other irritants.

The appearance of infected skin patches is one of the most important variations between eczema and psoriasis.

Eczema makes the skin red and it can be dry and flaky as well. The severe eczema itchiness can lead to bleeding and oocytic skin. When a person develops extreme eczema, the skin may appear rough and leathery, and the skin may also look black.

Conditions to Which They’re Linked

Psoriasis has been attributed to a number of severe health problems. You can also have diabetes, heart problems, or anxiety if you have it.

Eczema is also associated with dry, sensitive skin. It’s possible that someone in your family has it, as well as asthma or hay fever.

While psoriasis most often affects the knees and elbows, it can manifest itself anywhere. The ears, scalp, and neck are included in this. Psoriasis on the face and scalp may be treated with the appropriate care and with a reduced risk of recurrence.

Eczema on the face can be frustrating. The patches can be very itchy, further deteriorating the skin. Itching may result in skin breaks, which allow for bleeding or infection. Eczema on the face and scalp may be treated and recur less often with the appropriate care.

Psoriasis frequently affects the legs and knees. While certain forms of psoriasis may cover large areas of the legs, others occur in isolated patches. Psoriasis on the legs may be resolved and recurrence reduced with the right therapy.

Eczema on the legs commonly affects the back of the knee and the front of the ankle. Sweat or irritants from clothing or the air may get trapped in these places. Eczema on the legs may be resolved and recurred less often with the right care.

While many people have psoriasis patches on their hands and knuckles, some people have palm-like outbreaks. Light peeling and dry skin of the hands may also render quick, painful and unpleasant acts such as hand washing or collecting a bag. Nail psoriasis can also be included. Psoriasis on the hands may be treated with the right medication and with less repetition.

Eczema also affects the hands. This is because the hands come into contact with soaps, lotions, clothing, and other allergens or irritants on a daily basis. Frequent hand washing will exacerbate the dryness of eczema sufferers’ skin. Eczema on the hands may be resolved with the appropriate care and with less recurrence.

Each Condition associated with dry skin

Psoriasis patches do not often tend to be dry or scaly. Wide red patches can sometimes be devoid of clear scales. Until shedding scales, some patches can accumulate an extremely thick, white layer of dead cells.

Eczema also causes skin patches that are extremely dry. This can wreak havoc on the skin, making it brittle and prone to cracking. Peeling skin exposes exposed blisters or broken skin.

Psoriasis can become widespread and extremely irritating, like most skin conditions. Certain psoriasis may cover nearly the entire body surface. In extreme circumstances, the inflammation may become so severe that it is burning. These can lead to arthritic changes later on.

Eczema can also become extremely serious, covering much of the surface of the skin. The amount of eczema in the skin depends on skin sensitivity, exposure, and so forth. In cases of severe eczema severe cracking, oozing, and bleeding may become dangerous.

Age and Occurrence of Each Condition

At What Age Do Psoriasis Appear?

Psoriasis typically occurs between the ages of 15 and 35. However, it is also available at other ages. It is extremely uncommon for a baby to have it.

At What Age Do Eczema Appear?

Eczema normally appears in infants or young children. Sometimes, signs change as a child matures.
Adults are less likely to contract it, although it is possible. As this occurs, it is often due to another disorder, such as thyroid disease, hormonal changes, or stress.

Psoriasis occurs over time, but it is a lifelong disease. Many people with this condition feel isolated and ostracised due to a lack of public knowledge about psoriasis.
However, most people with psoriasis lead active lives. Here are a few tips to avoid triggers of psoriasis.
You can help patients with psoriasis to feel much better understood and welcome in society if you spread the word that psoriasis is not infectious and that it is a coloured autoimmune condition.

Just like psoriasis, eczema people have many years of off-and-on symptoms.
Sometimes it can be so severe that activity is restricted. People with eczema sometimes have difficulty noticing their state.
Knowing the difference between eczema and psoriasis can help you identify your condition and treat it adequately.

Psoriasis may be successfully treated if the patient obeys the protocol for treatment and lifestyle modification as per our Ayurvedic doctor. A strict dietary regime should be followed throughout the treatment period. Ayurvedic treatment, aims at detoxification of the body or to eliminate toxins from the body fluid. It is achieved through treatments with “Panchakarma.”
There must be restrictions on the black gram, yogurt, chilies, and salted food. Foods cooled/chilled should be avoided. Persons must maintain a state of mental calm.

Eczema is treated with dietary modifications and natural remedies in Ayurveda. It also relies on cleansing methods that control eczema by removing toxins from the body. Despite the potential advantages, not enough scientific evidence is available to support their eczema use. It is therefore not recommended to substitute Ayurveda for your existing treatment plan.

Eczema and psoriasis appear in various individuals in many ways. Since you don’t know exactly what you’re going through, it’s almost always a mistake to ask if someone else does. One should see a dermatologist or a specialist to get a diagnosis and treatment for skin problems like this.

To find out whether you have psoriasis or eczema, visit our EliteAyurveda clinic for more information about appointments on skin issues visit Contact Modes or contact us at +91 88847 22246 .

blogadmin - March 12, 2021 0
Regression is a risky for all kinds of autism, not just the kind in which children become frustrated if they don't get enough "neurotypical" stuff.